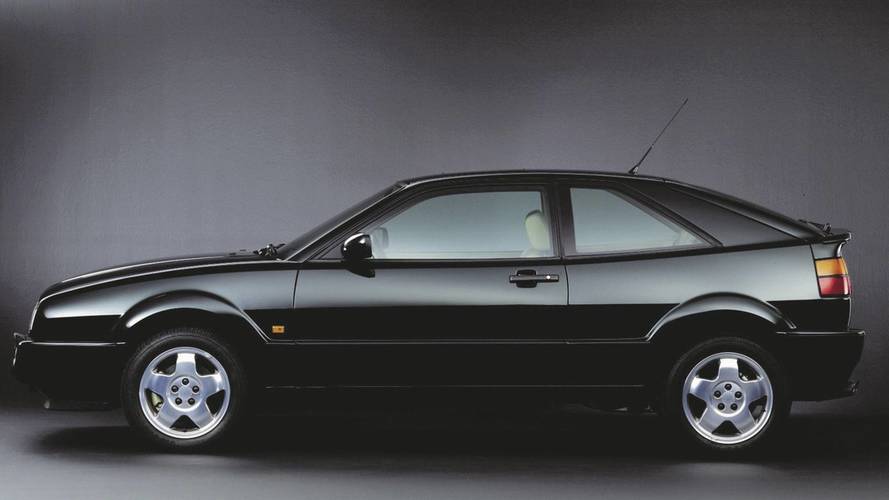 In 1990 Volkswagen launched the sale of a sports coupe in the United State, the Corrado – derived from the Spanish word “correr,” which means to run. The name deviated from VW’s use of weather vernacular when naming vehicles during the 80s and 90s, e.g. golf, passat and scirocco.

Although many believed that the Corrado (left) was built to be a successor to the Scirocco (right), VW maintained both models for several years, intending to reach a new buyer with the Corrado.

Per Volkswagen’s annual report in 1988:

“Launched in the autumn (the Corrado) is positioned in a somewhat more upmarket class of its own category than the VW Scirocco. It is the first true sportscar produced by Volkswagen.”

While Volkswagen Corrado sales efforts in the European market began in 1988, the 2+2 coupe fitted with a supercharged engine, dubbed the G60, would not make its way to the U.S. market until 1990 – making this year its 30th anniversay (note: a number of Corrados manufactured in ’89 landed in the US as market testers/teasers but the proverbial big splash didn’t happen until ’90).

Adjusted for inflaction, the sticker price would be over $35,000 today. This pricetag placed sales of the Corrado in a challenging position- VW itself was not viewed as a premium brand. For comparison, a Corrado roughly cost twice that of Golf and $5,000 more than a Passat. The Corrado targeted a more affluent consumer than VWs existing buyer demographic. While prototypes of the vehicle included a ‘Scirocco’ badge – a model the company had in market since the 1970s – the company ultimately scrapped the idea of a 3rd generation Scirocco in favor of a next generation platform: the Corrado G60.

The G-lader – lader is German for supercharger – leveraged a patent dating back to 1905, designed by French Engineer Léon Creux (for patent/sketches and other G60 factoids, check out this site). VW utilized the supercharger as a means to boost horsepower without the lag typical of a turbocharger. The G60 accomplished this, however the design also had its drawbacks. For example, the 0-60 time of 7.5 seconds was by no means considered fast at the time. Although quick out of the gate, the G60 Corrado required shifting into 3rd gear in order to reach 60 MPH (a benchmark that continues to this day). This small but important time-absorbing detail was a potential game changer in the hypercompetitive sports coupe market that included the Porsche 944, Ford Probe GT, and Toyota Celica GTS.

Another noteworthy feature was the motorized spoiler which extended at 45 MPH (75 MPH in European models, see Autobahn). At the time, this was a standard feature typically only available in Porsches (not coincidentally, the Corrado was allegedly designed for Porsche; the blueprint for what would later become the 924). The VW-Porsche relationship/saga/see-saw deserves its own post, but the net result was VW became majority owner of Porsche in 2012. 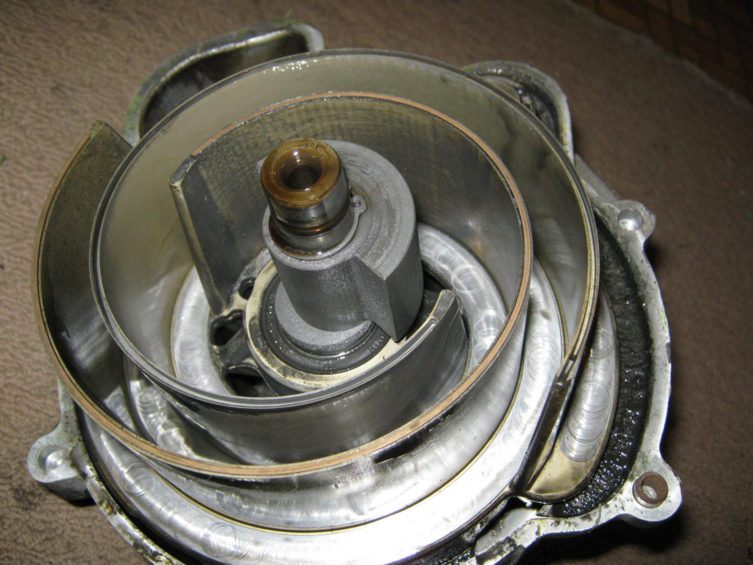 Another factor that VW execs and engineers perhaps overlooked was maintenance of the famous/infamous supercharger.

Volkwagen was taking a calculated risk by applying a nearly century old design into its sportscar. Further, owner’s manuals lacked any definitive maintanence schedule. The result? G-laders became known as “grenades” – as they would essentially self destruct or blow up at various stages. A supercharger could self destruct at 30K, 50K or 100K miles depending on the situation, including the level of spirited driving.

A rebuild of the supercharger could prevent more costly replacement (which many times included the engine); however, the combination of an unknown maintenance schedule, cost factors and fun factors resulted in many G60s detonating – many would not live to see another mile. 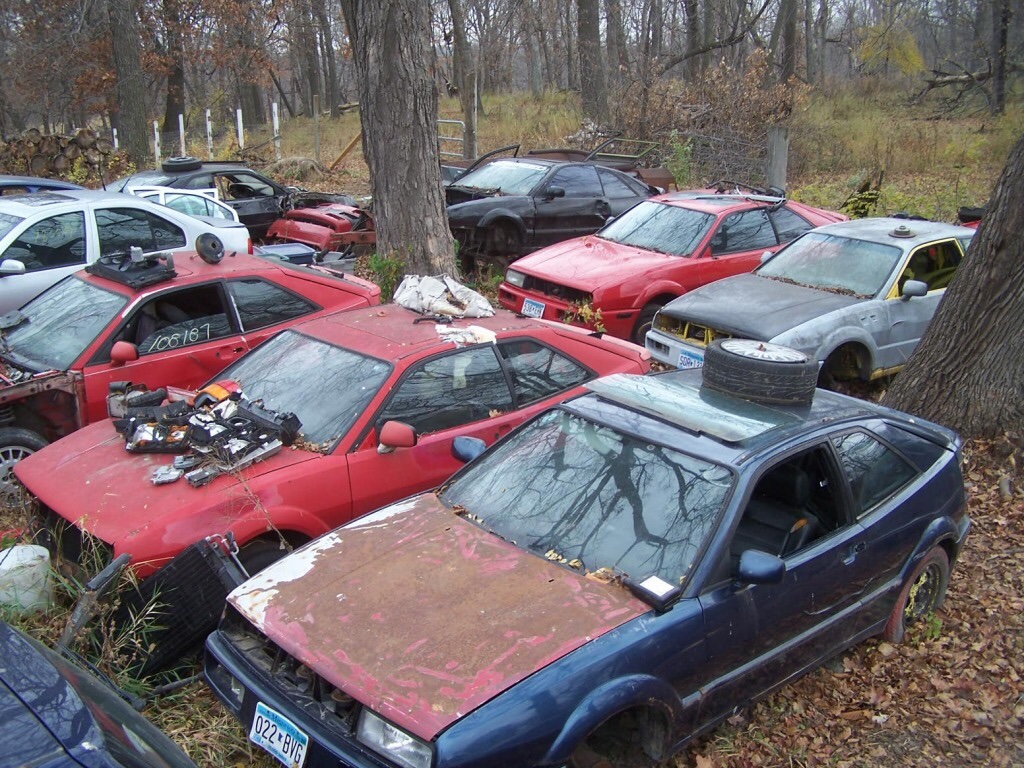 “Some may die, so others may live” ~ Winston Churchill (photo courtesy: VW Vortex)

The ingenuity of VW had been demonstrated with the G60 but it had not become the market maker or challenged Porsche as the company had hoped. According to some sources, manufacturing the G60 was too costly – others stated its reliabilty was to blame.

Ultimately, VW would develop a new engine that aimed to improve performance and reliability: the VR6. The “V” represented a narrow 15 degree angle between the engine banks. This essentially allowed for a bigger, naturally aspirated (no supercharger) six-cylinder engine to be stuffed into the engine bay, replacing the supercharged four-cylinder. As a result, 0-60 times would improve to sub-seven seconds.

If you consider Volkswagen manufactured a total of 18,412 Corrados for the U.S. market and the lifespan of a car is plus or minus ten years, seeing one on the road these days is rare. In order to obtain an estimate of how many of these cars are still road-worthy in the U.S., let’s consider data from ‘How Many are Left?’ – a website that utilizes motor vehicle registration data in the United Kingdom:

Owners and classic car gurus may wonder: does this inflection point represent a ‘Rado revival of sorts? Perhaps.

The number of registered vehicles in the U.K. has since declined; however, one can make the argument that the value of those left standing/running will likely go up as time passes. If so, you’ll agree with the following comparison from one YouTuber:

“The Corrado is Henry David Thoreau of cars- considered weird and inecessible during his time but after his death viewed as an important, influential product of his era.”

You may be curious to know how many of these cars are still on US roads? If we use U.K. data as a guidepost, I’d estimate there are 1,500-2,000 road-worthy ‘Rados in the US of A. This means that while Corrados are rare, they are not unobtainable.

“Second-hand heroes for those on a budget” ~ Tiff Needell, Fifth Gear

However, let the buyer beware as parts can be challenging to source and many ‘Rados have been neglected and/or sport-tuned to the gills. That said, the advent of the internet – including online auctions and Facebook groups (e.g. Corrado Classifieds, Burn all the Corrados) – makes the challenge less daunting. The final result can be owning a truly unique vehicle that delivers a truly one-of-a-kind driving experience for years to come. 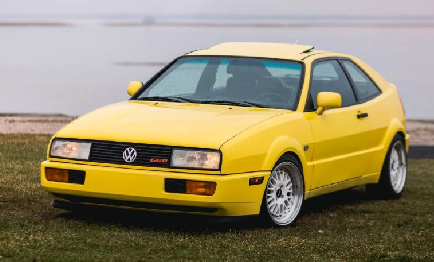 Outside of car enthusiast circles, the Corrado is still relatively unknown. Your point of view may depend on which model you own/owned. Like much in life, beauty is in the eye of the beholder.

If nothing else, the Corrado is an ecclectic car which needs to be driven to be appreciated. By attempting to enter a new market via DNA borrowed from peers (e.g. Scirocco, GTI, Passat), VW may have created an over-priced “mutt” within a niche that was not viable long-term. However, the end result is a vehicle that maintains a tight-knit community that welcomes enthusiasts from all walks of life, myself included. The Corrado gets partial credit my recent career shift from desk jockey to wrench-turner.

Seth Ulinski is an author, business analyst and auto enthusiast