Clemson football: a story of underdogs

By: @seth_ulinski|Published on: Jan 8, 2019|Categories: Uncategorized| 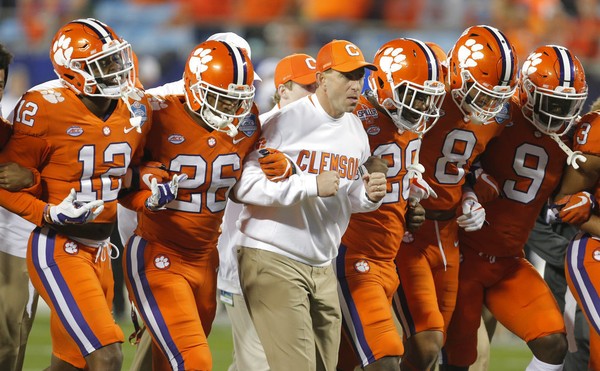 Clemson University’s football team just did the unthinkable. They beat a #1 ranked, undefeated Alabama team which was considered by some to be one of the best in the history of college football. Although Clemson and Alabama were both 14-0 entering the game, Clemson was a 6-point underdog. Final score: Clemson 44 Alabama 16.

For those unfamiliar with Clemson football, the program has acheived amazing heights since Dabo Swinney was named head coach during the 2008 season — winning 115 of 145 games (.793). After a decade at the helm, Clemson has risen from underdog status to perenial powerhouse, beating the best of the best. The argument can be made that Clemson is now on par with that of iconic Alabama football, which is 140-15 (.903) during the same timespan. Since the 2015 season, Clemson has faced Alabama in the championship game three times. Three times Clemson has been the underdog. It has won twice (2016 and 2018).

Full disclosure: I attended the first Alabama-Clemson matchup to cap off the 2015 season (which Alabama won) and am a Clemson graduate.

In order to fully appreciate the Tigers rise to the top, I think it’s worth noting the journey of Coach Swinney. How does a coach take a team with one national championship in its history (1981), to winning two titles in three years?

Per an ESPN article, Swinney’s family faced adversity on multiple fronts, including poverty, cancer and alcoholism. The family business had gone under. Swinney’s father lost a battle with lung cancer. His mother struggled to make ends meet while Dabo attended college. Dabo’s response to the latter: make room for his mom be his roommate. How’s that for putting family first during challenging times?

A togertherness mindset like this is invaluable for leading a team on the gridiron or at the office. Today, this mantra is part of Clemson football: no one player or coach (Swinney included) is bigger than the program.

Further, every member of the organization must be fully committed or “all in.” It’s amazing what like-minded individuals can achieve, even if they aren’t the most talented or heavily regarded. Under the right conditions, a collection of underdogs can beat a superior opponent. Ironically, Swinney was a walk-on to the Alabama football team. What he lacked in speed and size, he made up for with work ethic and determination.

“He’s always been the underdog,” said former Alabama quarterback Jay Barker, one of Swinney’s teammates at Alabama. “He has had to fight for everything and has never been given anything. That’s what has made him so successful. He loves being the underdog because he’s lived it his entire life.”

While Swinney & Co. just reached the pinnacle of college football for the second time in three years, he is still grounded in his view of Clemson’s football program: it’s one of the best in the land, but has not yet achieved dynasty status (see: Alabama football).

Most of us have faced challenging odds or been an underdog at some point in life. Major headwinds may come in a variety of forms. The key is understanding that even though we may not be responsible for a given situation (e.g. poverty, injury or sickness), we are responsible for how we respond. Pushing through adverse conditions is not supposed to be easy or fun. However, we are building the foundation for future success. Others may take note of your efforts and support you publicly (or in secret). Some may join your quest, whether it’s a championship run or simply being a better person.

Seth Ulinski is a graduate of Clemson University and the author of Amazing Heights: How Short Guys Stand Tall.